Life and Times of Alex Esguerra — US Congress 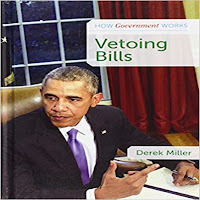 Vetoing Bills
A veto (Latin for "I forbid") is the power (used by an officer of the state, for example) to unilaterally stop an official action, especially the enactment of legislation. A veto can be absolute, as for instance in the United Nations Security Council, whose permanent members (China, France, Russia, United Kingdom, and the United States of America) can block any resolution, or it can be limited, as in the legislative process of the United States, where a two-thirds vote in both the House and Senate will override a Presidential veto of legislation.[1] A veto may give power only to stop changes (thus allowing its holder to protect the status quo), like the US legislative veto, or to also adopt them (an "amendatory veto"), like the legislative veto of the Indian President, which allows him to propose amendments to bills returned to the Parliament for reconsideration.
quoted from: https://en.wikipedia.org/wiki/Veto

Impeaching-the-president-past-present-and-future
A few days before a new year 2019 before the Democrats takes over control of the House of Representatives again opens the case on the subject of Impeachment.
Reading through Alan Hirsch book validates the process of impeachment.  A process that has been improved yet raise on every President since 1994's Bill Clinton's case of impeachment. From George Bush to even Barack Obama's issue of being not born in the US and using an Executive Order for DACA, it seems to be now a trend that "Impeachment" has been always a discussion in Congress. Whether it does happen, discuss or even a bill created towards impeaching the current Commander In Chief is the real question. What's the main difference as the author noted in previous Presidents is that most of the impeachable cases came about on the previous Presidents second term in office. The main relevance on this case today is on April 2017, 3 months right on the start of the 45th President Donald J. Trump first term presidency solidified his impeachment case followed by the creation of the Special Counsel to investigate on the Russian intervention of the 2016 Presidential elections.
As of this writing, it is the 3rd government shutdown on this administration when no deal came about with Congress and the White House. The main issue tackled is a "Border Wall" between Mexico and the United States, the main requirement of President Trump. The democrats as known will never agree to this border wall. The President now trying to get more and more open to negotiations, says it may now be a "Steel Barrier Fence" instead of a "Concrete Wall". Whether this new nomenclature will be agreeable still raises the question. If you really want to end the shut down Mr. President, a simple grammar correction might be "Border Security". Your business acumen knows better by using corrected grammar then identifying the right necessary steps and tools you might need taking into consideration what are the allowable actions in such terms.
Hirsch did a good representation of the historical narratives, engravings, illustrations and documentations on the impeachment episodes dating from Andrew Johnson, Richard Nixon to the last one of Bill Clinton. Clinton's case made the trend to start an impeachment discussion on every President that followed from Bush, Obama and now Trump.
America as the greatest country is the epitome of democratic principles. Authoritarian rulers are commonly seen in history from third developing countries for example as their President, Prime Minister, General are above the law coupled with corruption and human rights violations. Hence is why Saddam Hussein is now history. Such authoritarians act and lead on their own choice and command, controls their Congress and titled as military ruler. This is why some of them were deposed by their own military by way of a Coup D Etta.
As I see it, firing the AG, FBI Directors neither is obstruction on the case of President Trump is a long shot towards removal from office. Him holding the highest office of enforcing the law given to him sort of immunizes him being removed or sued right now. The campaign spending issues may or may not be legal cases but that will come after his presidency.
Congress is mainly focus on protecting the Special Counsel Mueller's from being removed or dictated. This is because this is the prime case that may lead to a case of impeachment if this President or his enforcers derails Mueller's investigation unless Mueller acted improperly. When a President prevents a Prosecutor to do his or her job because he feels threaten as signs shows in the past then this obstruction of justice for an impeachment case of the 45th President.
Richard Nixon as verified by the author in book made the strategy to change the Special Prosecutor and was not later impeached. It is agreeable that if Trump does replace Mueller it might or not reduced an impeachment case. However, today is very much a different case as this President has since already concluded on him being threaten by this Prosecutor's actions. Likewise, Nixon eventually resigned from office as a last resort. What happens to this President amidst a new Congress is there to see in 2019. It might turn things around for the better good by being non-partisan between Congress and the White House as seen in previous Presidents or whether a case of impeachment is doom, we will have to see.
May we enjoy the blessings of this Holiday Season and Hoping for the best of the New Year.
Alex Esguerra