Nowadays, Fighting for Housing in America is a pandemic plaque in the modern technology era

With the onset of the tech boom, today's lifestyle focus on apps, smart devices and lights, siri, social media practically on automation. An presidential election coming, absurd political parties bickering with candidates laying on platforms. Yet in the America, the richest and greatest country on earth thrives two of the worst problems typical in a 3rd world country - Homelessness and Access to Affordable Housing.
In 1998, when the  tech boom started and the markets crash, one of the reasons I founded, ADLE International was focus on continuing my outreach for people with low income, the elderly, the disabled, the marginalized youth, veterans and societies most vulnerable to disparity, discrimination and inequality due to having limited financial means and resources. Two decades after I can't just tell myself I can't believe  the problem is still here and for all you know has gotten worst.
Part of the culprit lies on the severe income brackets of the so called rich, very rich and low income nowadays extreme poverty level. The State Medical and Medicaid systems for example classify lower income needing extra help if monthly personal cash reserves are below $2000 in San Francisco, CA when even an SRO (Standing Room Only aka Single Room Occupancy) in it's poor Tenderloin neighborhood range from $800 to $1300 and a typical Studio cost $1400 to $2,000 a month. It does not do the math as if you held $2001 anticipating just your rent, your no longer qualify for extra help and Medical/Medicaid might even cancel your enrollment.
The biggest challenge on top of this complication is if you just move to the city of San Francisco, there are no low income housing unless you want to go on to this massive wait list on the properties considered low income and affordable from 9 months to 5 years. If you have a parent on SSI (Social Security Income) that can no longer live alone and needs assisted living do the math = $900/month income and a typical shared assisted living which 95% only accepts private pay require $5000/month the cheapest shared room. Hence, is why part of the homeless population in the city are the vulnerable very elderly and even veterans who serve as there is no housing!
So when we were listing a book on our website today I said I have to write a blog even though it's been a while I haven't done one. Golden Gates: Fighting for Housing in America. 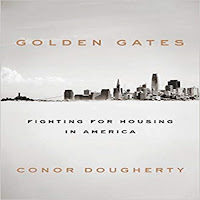 Conor Dougherty (Author) I believe made a good case presentation on this book  as he writes. "A stunning, deeply reported investigation into the housing crisis
Spacious and affordable homes used to be the hallmark of American prosperity. Today, however, punishing rents and the increasingly prohibitive cost of ownership have turned housing into the foremost symbol of inequality and an economy gone wrong. Nowhere is this more visible than in the San Francisco Bay Area, where fleets of private buses ferry software engineers past the tarp-and-plywood shanties where the homeless make their homes. The adage that California is a glimpse of the nation's future has become a cautionary tale."
Indeed San Francisco has won the title of the most expensive city in the West and at times now have gone over New York becoming the most expensive city in the US. Oracle's OOW - Oracle Oracle Openworld Conference one of the biggest technology conferences in the last decade and a half this year finally left San Francisco to Las Vegas losing millions of tourist revenues for the city. Some of the conference attendee feedback received were of the so exuberant high cost of hotel rooms, the city has gotten dirty and a resounding majority stated homelessness. The cities Moscone Center perimeter for the yearly event has the various surrounding hotels in the union square shopping center as well the tenderloin neighborhood where the cities homeless are visible.
Dr. Sonja Trauss story in the book is the exact case scenarios by so many people living in the San Francisco Bay area. I really recommend spending some time reading this book so you can get a real store glimpse of why?

The Pyschology behind Sexual Misconduct allegations currently in the political arena.

Posted by Alexander Esguerra on December 08, 2017 Yesterday, the most talk about allegations on Powerful men including Sen. Al Franken (D-Minn.), Rep. John Conyers Jr. (D-Mich.) and senatorial hopeful Roy Moore (R-Ala.) came into reality when Sen. Franken resigned followed Rep. Moore.
With the backlash on denials and accusations, people will either wonder if they are real or not or just simply politics. We can even remember the fact checker article prior to the election of our sitting President.
The question lies on how and why such things that happened years ago are just now  suddenly getting allegations after all those years. The explanation is quite complicated as there are so many surrounding factors and circumstances.
However, one thing we should remember that politicians are humans like the rest of all of us. Whatever we do in our daily lives in terms of interactions and personality nothing differentiates them. What I do recall is that politicians when they act towards others like their staff, they can, maybe or will be perceived that they have the authority to command by virtue of their position.
Hence a politico may simply be saying "X" rated remarks to make a joke, tapping someone on the shoulder without thinking that the recipient person in the room feels obligated to either laugh or simply not say their objection. After the incident, the recipient goes on with his/her life until such time he/she hears an accusation to the said politician. Then after, the memories comes back in time so the said recipient may then come out all these years to join others in confronting the once mighty politician.
This is the psychology behind sexual misconduct allegations may take a while or years until the violator is confronted. Another part is the fear way back when the incident happened that the victim fears on retaliation like losing their job, etc.., as they were to be alone then if they did complain.
This is also partly why it suddenly becomes a trend or series of events and accusations. People start thinking and bravely comes out to complained when they see others are coming out against a mighty politician.
The lesson on these recent developments is that at some point and time, anything you had done or implied with an inappropriate conduct will haunt you as it it just a matter of time.