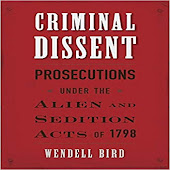 Criminal Dissent - Wendell Bird (Author)  writes In the first complete account of prosecutions under the Alien and Sedition Acts, dozens of previously unknown cases come to light, revealing the lengths to which the John Adams administration went in order to criminalize dissent.
The campaign to prosecute dissenting Americans under the Alien and Sedition Acts of 1798 ignited the first battle over the Bill of Rights. Fearing destructive criticism and “domestic treachery” by Republicans, the administration of John Adams led a determined effort to safeguard the young republic by suppressing the opposition.
The acts gave the president unlimited discretion to deport noncitizens and made it a crime to criticize the president, Congress, or the federal government. In this definitive account, Wendell Bird goes back to the original federal court records and the papers of Secretary of State Timothy Pickering and finds that the administration’s zeal was far greater than historians have recognized. Indeed, there were twice as many prosecutions and planned deportations as previously believed. The government went after local politicians, raisers of liberty poles, and even tavern drunks but most often targeted Republican newspaper editors, including Benjamin Franklin’s grandson. Those found guilty were sent to prison or fined and sometimes forced to sell their property to survive. The Federalists’ support of laws to prosecute political opponents and opposition newspapers ultimately contributed to the collapse of the party and left a large stain on their record.
The Alien and Sedition Acts launched a foundational debate on press freedom, freedom of speech, and the legitimacy of opposition politics. The result was widespread revulsion over the government’s attempt to deprive Americans of their hard-won liberties. Criminal Dissent is a potent reminder of just how fundamental those rights are to a stable democracy.

At this moment and time, the news media writes about the coup intents speculation caused by the the 45th President's failure to concede to the incoming 46th President elect and the worry that the Republican's and the 74 million Trump voters that will hinder the Biden presidency deeming it illegitimate.

At the same, while writing this blog on the eve of the deadline of the stimulus negotiations on Capitol Hill by Congress debates, the news media is also reporting on leak unverified oval office meetings about discussions on the intent of "Martial Law".  If your someone who have not seen Martial Law in a developing country then you wouldn't really understand the realities of this.  However, if you are then the first thing that will come to your mind will be for all these ages, why did America became the riches nation on earth, why did all the immigrants immigrated to America to make land of the free and make rich! As the only dictators that these ideas would even be an idea are the desperate autocrats who will do anything, I mean anything! in a third world country!

Hence is why The United States has a federal law against seditious conspiracy in Tile 18 of the US Code, 18 U.S.C. S. 2384. "The Sedition Act made it a crime, in effect, to criticize the president, Congress, the federal government as a whole, or its measures, whether by press or speech." As a result, Bird has properly called for a re-evaluation of the Act, dismissing previous historians' largely-successful attempts at whitewashing and rightly condemning the Act's powerful supporters, such as Alexander Hamilton, President George Washington, and President John Adams.