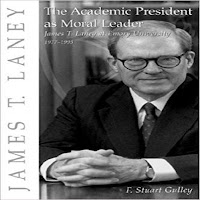 What is the President’s Greatest Responsibility?

https://adleinternational.com/products/the-academic-president-as-moral-leader-james-t-laney-at-emory-university-1977-1993?variant=23924506329169
The presidential oath of office that is prescribed by the U.S. Constitution (Art. II, sect. 1) makes it clear that the President’s supreme responsibility is to “…preserve, protect, and defend the Constitution of the United States.”
Moral Leadership has a different point of view in leading their followers. They take action by choosing the moral and the most ethical decisions to solve an issue. Moral Leaders take beliefs and moral as a personal matter. Moral Leaders follow their moral rather than the organization's value.
Do leaders as a President  have moral obligations? ... Morals do not have to be religious or stemming from a certain set of beliefs, they are just what makes a good or bad decision and if the decision is right or wrong. Leaders should know that they have to make decisions that benefit the greater community.
"The president is the very first symbol of American government that children comprehend," she says. "The president, especially in the modern era, comes into our homes — first by radio, then television, now through all sorts of electronic gadgetry — and so we think of him as part of our life. And that's why it's so important for him to model the proper behavior for us."
I find that again and again, no matter what the subject is, we return to the question of leadership. Moral leadership is in fact the central task of our presidents when it’s done correctly,” said Jon Meacham, a Pulitzer Prize-winning historian who has written books about Thomas Jefferson and Andrew Jackson. He spoke at a luncheon in October kicking off a year-long series on Moral and Ethical Leadership in the American Presidency.
The best presidents – including figures such as Abraham Lincoln and George Washington – are celebrated not only as good leaders, but as good men. They embody not simply political skill, but personal virtue.
Why, though, should anyone expect a president to demonstrate that sort of virtue? If someone is good at the difficult job of political leadership, must they demonstrate exceptional moral character as well?
In Nov. 7 2018 during a press briefing at the White House, President Trump defended his rhetoric and his status as a “moral leader” after a reporter asked him about the rise in anti-Semitic attacks during his presidency.
“I think I am a great moral leader and I love our country,” Trump said Wednesday at a White House news conference.
Today's modern era on American Presidency depicts a lot on the presence and influence a President makes to the country through our televisions, radio, online, social media and all channels we see the daily current events. The basics on this moral perspective starts right from the words uttered by a leader and the message he/she communicates to the people.
Unfortunately, each word and statement uttered to the executive actions no mater how significant and valuable they are is tied to a moral responsibility as leader of the free world and as protector of the US Constitution.
Moral responsibility without even looking at the political implications they have dictates the outcome it sends to the people. The daily actions affecting moral responsibility of a president eventually is a writing material for Presidential historians,